England, the host of ICC Cricket World Cup 2022 have announced their 15 members preliminary squad. England are considered as the strongest contenders to win this World Cup and this squad is clearly justifying this. 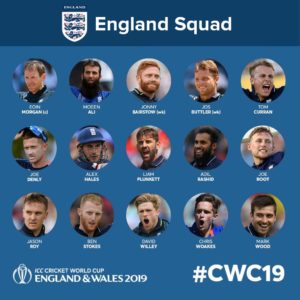 Their regular ODI captain Eoin Morgan will be commanding the team in the World Cup 2019 also and Jos Buttler will be his deputy.

Along with Eoin Morgan; Jonny Bairstow, Jason Roy, Joe Root and Alex Hales will the big guns in England’s batting for the World Cup.

Jason Roy and Jonny Bairstow will be the team’s first choice as opening pair with Alex Hales will be the reserved opener.

Joe Root is the strongest pillar of England batting and team’s success will depend a lot on his performance.

Jofra Archer and Chris Jordan have not been picked in the 15 member squad, but they have been selected in 17 member squad that will play against Pakistan in the their tour to England next month.

Jofra Archer and Chris Jordan may be considered for the Final World Cup squad after ENG vs PAK series.

Ben Stokes, Moeen Ali, David Willey and Chris Woakes are the World class alrounders in the England side and their performance with both ball and ball will be crucial.

England have selected Moeen Ali and Adil Rashid as the frontline spinners. Joe Denly has been added to the team as the 3rd and reserved spinner.