Bangladesh became the fourth team to announce their 15 member squad for ICC World Cup 2022. Prior to Bangladesh; New Zealand, Australia and India have announced their squad for World Cup. 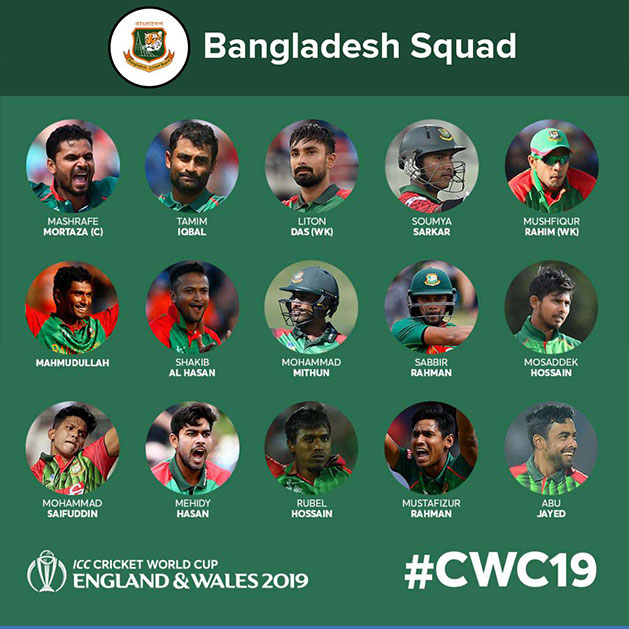 Mashrafe Mortaza has been given the Captaincy responsibilites for this big event. Shakib Al Hasan who has made a comeback into the team after injury will be the Vice Captain.

Along with these two, Tamim Iqbal, Mushfiqur Rahim, Liton Das, Soumya Sarkar and Mahmudullah are the other senior members who will travel with team to UK and Wales.

All-rounder Mosaddek Hossain has also secured his place for the World Cup. Pacer Abu Jayed is the new entry into the team. He is yet to play an ODI for Bangladesh.

Tamim Iqbal is sure to open the innings for Bangladesh in World Cup 2022. The team management has to make a decision between Liton Das and Soumya Sarkar as his 2nd opening partner.

Bangladesh batting in the World Cup will revolve around Tamim Iqbal, Mushfiqur Rahim and Mahmudullah.

Mashrafe Mortaza, Rubel Hossain and Mustafizur Rahman will lead the pace bowling attack for the team. Mahmudullah is suffering from shoulder injury so he is not likely to ball during the World Cup. So Shakib Al Hasan and Mehidy Hasan will be the prime spinners for Bangladesh.

Shakib Al Hasan with his extra ordinary all-rounder capabilites can turn any game in his team’s favor. So his contribution with both ball and bat will be the key for team’s success.