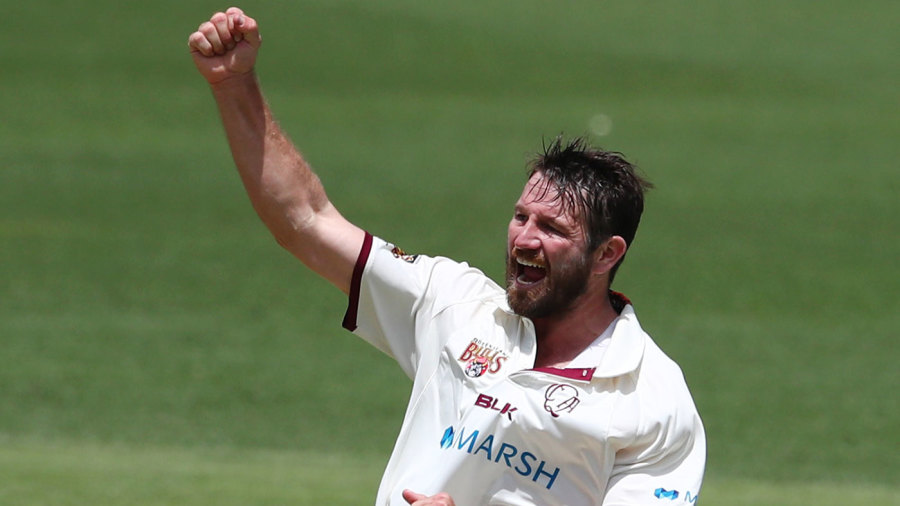 Michael Neser and the other Queensland seam bowlers thrived on a green Gabba pitch to roll Tasmania over for just 78 on the opening morning in Brisbane.

Neser took 4 for 18 and Jack Wildermuth bagged 3 for 17 as Tasmania were bowled out inside 38 overs after being sent in to bat after losing the toss.

The pitch was scarcely distinguishable from the rest of the square and the outfield, and batting was brutally difficult as the ball seamed and swung consistently. Neser removed both openers, trapping Jordan Silk in front and taking the outside edge of Alex Doolan’s bat. He later returned to nab Australia Test skipper Tim Paine with the worst ball of the day as Paine chipped a full toss to mid-on.

Charlie Wakim was the only Tasmania batsman to reach double-figures. He and Jake Doran were also the only ones to bat for a significant stretch of time – Wakim faced 50 balls for his 11 and Doran 56 for his 7.

Ben McDermott was unfortunate to be given out caught behind but the rest could not help but nick to a hungry cordon of catchers behind the wicket. Queensland’s spinner Mitch Swepson was not required to bowl.

The Bulls were then able to blunt Tasmania’s attack late in the day despite the ball continuing to move prodigiously, with Bryce Street absorbing 154 deliveries to finish not out on 41.

Joe Burns fell top-edging a pull off Jackson Bird for 23 before Marnus Labuschagne appeared to be caught behind first ball from what looked like a regulation and healthy outside edge. But the umpire was unmoved and the Tasmanians were mystified. Bird eventually got his man with Labuschagne edging to second slip for 26 attempting an ambitious drive on the up.

Street was the immovable object continuing the form he displayed before the BBL break steering the Bulls to stumps just two down with a lead of 37, alongside skipper Usman Khawaja.

Alex Malcolm is a freelance writer based in Melbourne