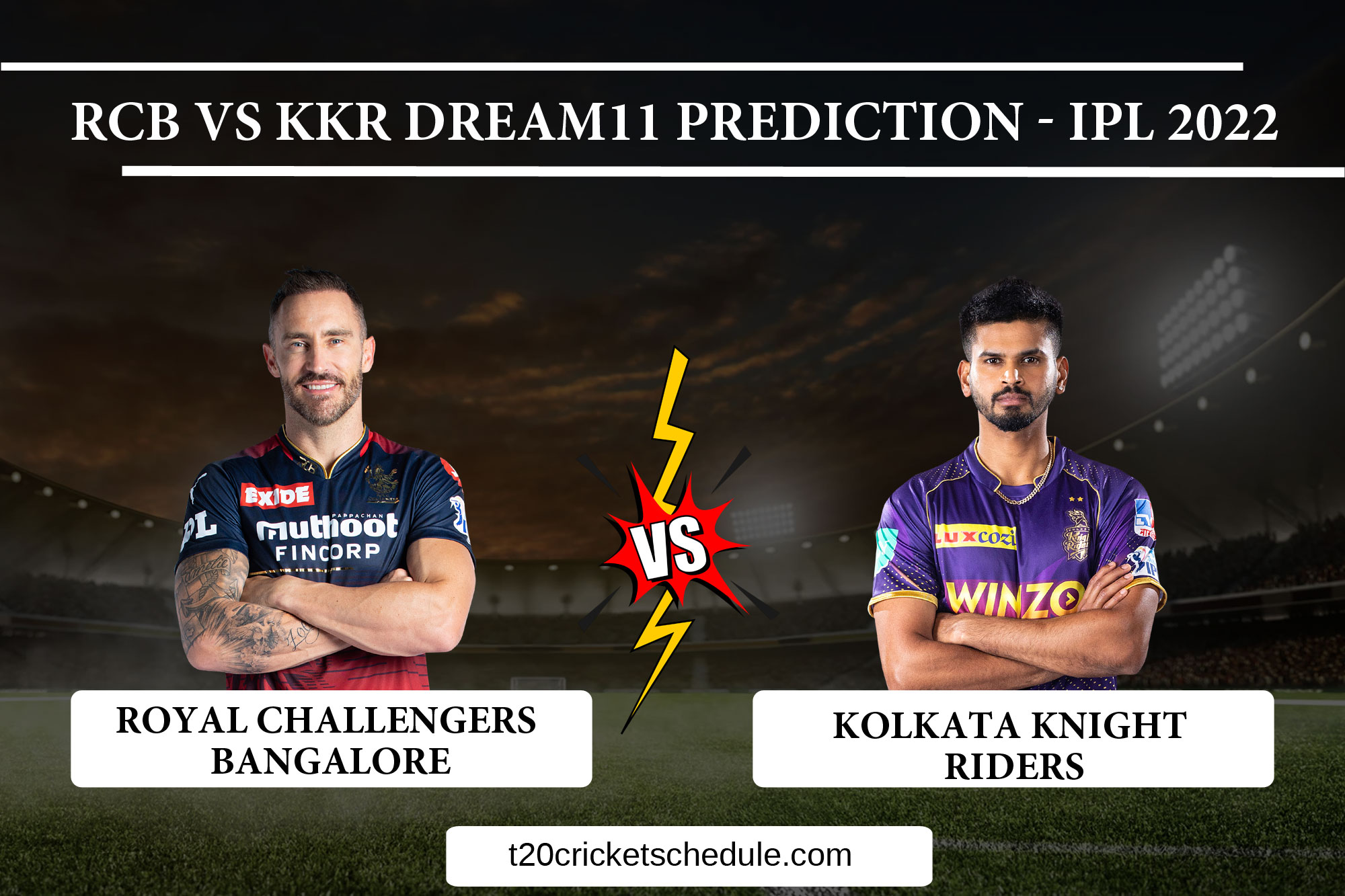 Royal Challengers Bangalore will face Kolkata Knight Riders in the 6th match of IPL 2022 that will be played at Dr DY Patil Sports Academy, Mumbai on 30 Mar and will start at 7:30 PM IST. Read here complete information about this RCB vs KKR match including preview, prediction, playing 11, Dream11 Team etc.

Captain Faf du Plessis was the star performer for RCB in the first game against PBKS. He blasted 88 runs in 57 balls and his brilliant innings helped the team to post a total of 205 runs for the loss of just 2 wickets. Anuj Rawat and Ex-Captain Virat Kohli also made a decent contribution with the bat. Wicket Keeper Dinesh Karthik played a wonderful cameo of 32 runs in only 14 balls. The top order for Royal Challengers Bangalore was looking in fine form in the opening game.

The in-form top order of RCB is expected to do a massive role with the bat in the game against KKR also.

Most bowlers of RCB were disappointed in the first match as the opposition was looking in no trouble while chasing a target of above 200. But that was not completely the bowler’s fault because the pitch is always helpful for the team batting second. Harshal Patel who received a purple cap in the last season is expected to get some early wickets for the team in this match against KKR.

Mohammad Siraj took 2 wickets in the opening game but he was very expensive as he gave away 59 runs in 4 overs. He needs to control his line and length and avoid conceding too many runs.

Kolkata Knight Riders beat 2021 winners CSK by 6 wickets after restricting them to just 131 runs in the first match.

Umesh Yadav was pretty economic in his spell as he took 2 wickets with only 20 runs in his 4 overs. His bowling effort helped the KKR team to restrict the strong batting of CSK at 131 runs. He was looking in sublime form with his bowling in the match and would look for the same kind of performance in this upcoming match also. Varun Chakaravarthy also showed his talent with the ball by taking 1 wicket and giving away only 23 runs in his spell. He can display fantastic bowling effort in the match against RCB also.

Bowlers were the heroes for KKR in the first match against CSK, but their batsmen especially opener Ajinkya Rahane stole the show by hitting 44 runs. Their top order along with Venkatesh Iyer, Nitish Rana, and captain Shreyas Iyer chipped in with short but useful innings.

With the likes of these batsmen in Kolkata Knight Riders, they are looking for a strong batting lineup in IPL 2022 season.

RCB vs KKR Head to Head Stats in IPL T20

Both RCB & KKR were best in the first game of IPL 2022. RCB batsmen were at the top of their form as the team put a total of 205 runs on board after losing only 2 wickets. KKR also won their first match of IPL 2022 against CSK with a great performance of both their batsmen and bowlers. Both RCB & KKR have abilities in their batting & bowling departments, but we are going with Kolkata Knight Riders to win this match because they outplayed the opposition in both these departments in the first game.

Faf du Plessis can play match-winning innings for his team. Shreyas Iyer is also one of the players who can give excellent performance with the bat and help the team to win. Wanindu Hasaranga, Andre Russell can prove their all-rounder abilities by making good runs and taking wickets. Harshal Patel, Umesh Yadav, and Varun Chakravarthy can be very impressed with the ball