The 15 member squad of Australian Cricket team for ICC World Cup 2022 has been announced and the big news is that Steve Smith and David Warner have been included in the team. Smith and Warner will be back into the team after a suspension of two years. 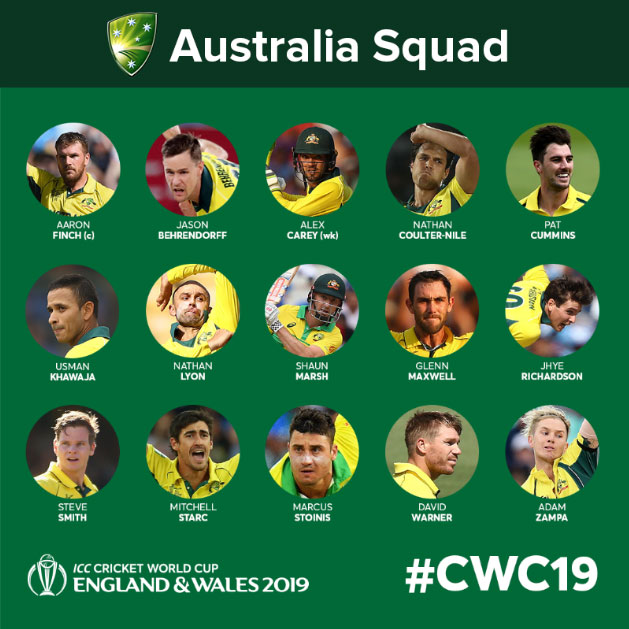 Pacer Josh Hazlewood and batsman Peter Handscomb failed to find the place in Australia World Cup squad. Usman Khawaja who has done brilliantly with the bat in recent 2-3 series has been able to book his seat in the World Cup squad. Apart from Khawaja Shaun Marsh is also lucky to be included in the World cup squad.

Australian team will be boosted with the return of big guns like Steve Smith and David Warner. With Warner back into the side, it will be difficult to make a choice between him and Khawaja for who will open the innings with Aron Finch.

Pat Cummins and Mitchell Starc will be their frontline pacers. Nathan Coulter-Nile, Jason Behrendorff and Jhye Richardson will be the other options in the Australia pace bowling attack.

Along with five fast bowlers, there will be two specialist spinners in the Australian team in the form of Adam Zampa and Nathan Lyon. Glenn Maxwell, Marcus Stoinis, Jhye Richardson, and Mitchell Starc will play the role of alrounders for the team.

Vice Captain Alex Carey will the the only specialist wicket keeper in the team.

Australia have been performing well in recent times. They won ODI series against India few days ago and are looking in good form. The team will be motivated further with the star players like Smith and Warner back into the side. The team looks solid and has strong chances to defend their World Cup title.

Talking about the omission of Josh Hazlewood; Trevor Hohns, Chairman of selectors said although he is not included for the world Cup, but he will definitely be the choice for upcoming Ashes.